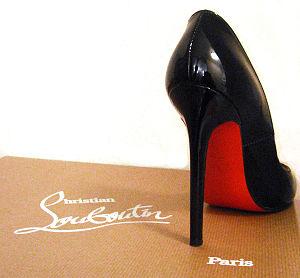 Tiffany’s, the top-end bangles-retailer, apparently feels blue enough to think out of and about its signature box and how it might be crushed in the trademark clash with Yves Saint Laurent over Christian Louboutin and his red-soled footwear. Yes, of course, this is intellectual property combat of more than passing interest to entertainment law practitioners — not just because their clients cache and adore these upscale baubles but also because the same big-spending crowd increasingly has ambitions to cash in, in the celebrity-named luxe goods markets.So, first, let’s note that Christian Louboutin has appealed his case Louboutin v. Yves Saint Laurent after U.S. District Judge Victor Marrero’s decision denying him an injunction and holding that the plaintiff’s red-sole trademark was likely invalid.  As reported in a previous post, the decision left many stunned given the extensive evidence indicating that the mark had acquired secondary meaning and would cause consumer confusion.  The appeal brief restates many of the arguments originally made for the injunction, but also seeks to find Marrero’s assessment of the law in error.

Things got a little more interesting then as Tiffany joined the fray, concerned, of course, about its signature blue trademark. Tiffany’s filed an amicus curiae in the Southern District of New York.  As reported by Women’s Wear Daily, the difference between Tiffany’s blue-  and Louboutin’s red-sole-trademark is that one involves product packaging while the other product configuration.

While Tiffany’s does not agree with all of Louboutin’s arguments, it “is trying to assure that this area of the law is not disturbed by an overbroad decision in the lower court.”

In his appeal, Louboutin notes that his red soles have become brand icons, featured in print and online media around the world, including Vogue and Elle, and in television shows and movies such as Sex and the City and Desperate Housewives.   Further, A-list celebrities often are photographed wearing his kicks on the red carpet, with shots appearing regularly online and in magazines like US Weekly and People.

Is it gilding to point out again how much celebrities extend their name brands into perfumes, clothes lines, watches, jewels and other goods and services for the affluent, all with big finances accompanying, including for entertainment lawyers savvy enough to handle the range of their clients’ trademark, copyright and other intellectual property needs? Consider that while Jessica Simpson may last have had a hit tune around the time radios had tubes and required cranking, her fashion line has been valued at almost $1 billion.

Sheba Sheikh is a student in the PLEAS program at Southwestern Law School, with a focus in copyright, trademark, and fashion law. She has attended Fordham’s Fashion Law Institute, has worked at HauteLook and now is at ShoeDazzle. She earned her bachelor’s in international relations from Stanford University. She has founded the the Fashion Grid, a blog devoted to the intersection between fashion and the law.

Power on! A costumer copyright challenge