He’s a fresh-faced, eager but ruthlessly ambitious guy who somehow also manages to be nice, likable and accomplished. He’s also more than a little furtive, mysterious and slippery. And the actor who captures all these characteristics — a star who also portrayed a youthful warrior who would morph into one of the notorious, tortured Freudian villains of pop culture — has won praise for putting a personable, accessible and bespectacled face on the practice of pathological lying. Why is it worth revisiting actor Hayden Christensen as scribe Stephen Glass in the critically acclaimed but relatively low-grossing flick Shattered Glass?

Well, when truth turns into fiction, fiction shows truth and the truth becomes an object of scorn, this must be a mix of Washington, Hollywood and San Francisco or journalism, movies, the law and commentary. And who knew that the odious practices of one craft, chronicled in a movie three years ago, would be resurrected in a California Supreme Court rebuke and then would subject the legal profession to its own tut-tut-ing over  its bad actors?

Let’s flash back: Stephen Glass earned notoriety, especially in the navel-gazing world of Washington journalism, after his out-to-lunch editors were shocked, shocked, to discover that he had fabricated twenty-seven out of forty oh-so-perfect articles he wrote while working for The New Republic magazine.  In Shattered Glass, he is portrayed as a young (only 24 years old at the time), ambitious journalist under mounting pressure;  not only does he strive to the be the best at journalism, but at school and life in general.  Christensen, who also was cast as Anakin Skywalker, shows him to be an affable, popular fellow with a flare for capturing the most salacious scoops on politicians, political organizations and hot-button issues.

But he’s also a dodgy dude, as he fends off queries about his stories from other snob pubs like Harper’s, Policy Review and (now defunct) George.When they and others poke at his pieces and ask for follow-ups to inconsistent points, always politely inquiring, too, if he’s offended at the requests,  he responds, “I’m not.  It’s probably nothing.  Send it to my voice mail, okay?”  Then Glass slips to the dark side, becoming a cunning miscreant. As the questions increase about his attention-getting articles and the whispers about his sources and facts turn into more formal interrogation, he creates elaborate lies and scams to cover up his misdeeds. His actions fly in the face, as the California Supreme Court would later note, of the Code of Ethics of the Society of Professional Journalists, which says the duty of a journalist is to further public enlightenment “by seeking truth and providing fair and comprehensive account of events and issue[s]…striv[ing] to serve the public with thoroughness and honesty.”

By the film’s finish, Glass’ cool composure crumbles and as he scrambles to cover his misdeeds, he is emotional and almost suicidal at times.  He offers what seems to be a tearful heart-felt apology. But he never fully admits to his sins.  In the last scene, he sits across from editor Charles “Chuck” Lane, while the boss intones the titles of Glass’ articles and looks at the cipher boy for some reaction or acknowledgment that he’s a big, fat liar.

Then a dozen years pass 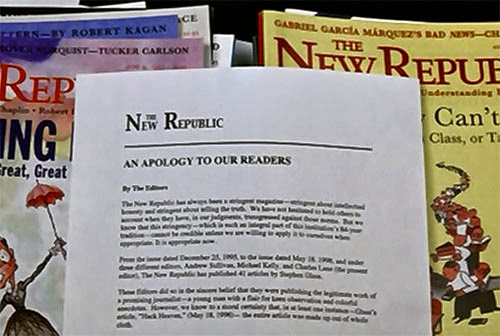 Flash forward: In the next dozen years, the disgraced wunderkind seems to turn his life around.  He undergoes therapy,  publishes The Fabulist, a novel based on his experiences, and  appears on 60 Minutes, where he offers a public apology. Glass writes 100 apology letters to those harmed by his articles. He also goes back to law school, and while working as a law clerk, he devotes countless hours and efforts to helping the less fortune. Is he older, wiser and ready to win acceptance in another life and another profession?

The State Bar Review Department accepts his moral character application for the Bar, piously opining, “even those who have committed serious, indeed egregious, misconduct, are capable of overcoming their past misdeeds.”

Alas, the state Supreme Court — cue Inspector Javert, please — disagrees. With scorn. The justices, in rebuking the applicant and refusing him admission to the Bar, declare: “Glass’ energy since the end of his journalistic career seems to have been directed at advancing his own career and financial and emotional well-being,” and in the practice of law, “[h]onesty is absolute …; without it, ‘the profession is worse than valueless in the place it holds in the administration of justice.’ ”

Well, alrighty then. This brings us back around to the Fourth Estate, where, of course, Glass skated so briskly from truth (small T) to fiction, and where ink and electrons begin to flow about glass houses and stones. Translation: The commentary begins to flow about the sanctimony of the Golden State’s high court and the legal profession’s blind eye to turpitude beyond lying, to wit these upstanding members of the profession:

As Op-Ed author Jane Chong noted in her piece, When Lawyers Go Bad, Glass’s “misconduct, egregious though it was, did not involve a client he was paid to defend.”

To censor or not? Sen. Franken riles critics

Walmart rears up against cartoonist’s site